Tamu Chambers is a Professor in the History, Philosophy, and Social Science Department at Hudson Valley Community College. At Hudson Valley Community College, she teaches Cultural Diversity in American Society and other ethnic, history, and sociology courses. Since 1996, she has taught Diversity in the Workplace, Human Resource Management, and Principles of Marketing courses in the Finance and Marketing Department at Empire State College – Center of Distance Learning. She is a former co-founder and executive director of the Diversity Enrichment Institute at Russell Sage College.

Program designs are uniquely based on the needs of institutions of higher education,, public and private sector businesses, and community based organizations.  Professor Chambers’ focus is on designing training modules that are tailored to individual customer needs, rather than providing “off the shelf” products.  She is interested in getting her customers the results they need rather than expecting them to fit in with “out of the box” or “canned” training materials.   She continues to receive praiseworthy reviews for her dynamic diversity training programs. Professor Chambers’ diversity training consists of a combination of both intrinsic behaviors in the form of groups and extrinsic or institutional structures. The modules include both of these behaviors for greater effectiveness in positively influencing individual behavior and institutional practices. She uses a combination of old and new approaches, such as blended learning techniques, to bring a fresh and flexible approach to developing the capability of people in organizations, reflecting the complexity of valuing diversity in the modern workplace. Her years of teaching and training help her to recognize that the most important learning takes place in the real world, and she will work with your people to turn learning and development into a habit that continuously improves performance, rather than being an occasional break from the “day job.”

Professor Chambers is a master diversity trainer and program designer. She is recognized as an effective diversity consultant and content developer for public and private employers, both here and abroad, in institutions of higher education – including a residency at Oxford University in London, England, and numerous public and private corporations, and community based organizations. She has an extensive background in human resources and training. For more than 15 years, she has earned a local, national, and international reputation as an innovative and creative diversity program trainer and workshop facilitator. Professor Chambers has written chapters for the International Encyclopedia in Public Policy and Administration – “Models of Excellence in Work Force Diversity” and definition of “Cultural Bias” for the International Encyclopedia in Public Policy and Administration – as well as numerous articles about workforce diversity. She is the author of several equity training manuals for private and public corporations.

Professor Chambers continues to teach Diversity in the Workplace for Empire State College, Center for Distance Learning. The capstone project consists of conducting diversity audits for various public and private sector employees. For over a decade, she has evaluated diversity audits for more than 200 organizations.   Professor Chambers was selected by the President of Hudson Valley Community College to serve as the college’s chair of the academic component of the Diversity Audit Task Force.
Professor Chambers has assisted in producing various television shows, radio programs, commercials, and webcast productions. She is the author of numerous articles and training manuals about workforce diversity and a contributor to the International Encyclopedia and other journals in higher education.
Diversity Training Achievements: 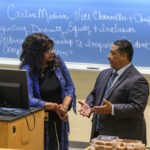 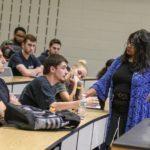 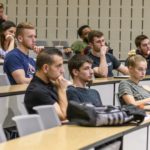 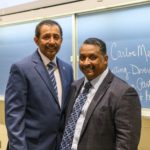 Excerpts from Teleconference “Creating an Environment of Multicultural Synergy” 4/27/95 – Intro and Vignette: https://youtu.be/TSXznLh9osI

Excerpts from Teleconference “Creating an Environment of Multicultural Synergy” 4/27/95 – Discussion and credits: https://youtu.be/xQ3s66q8ttc